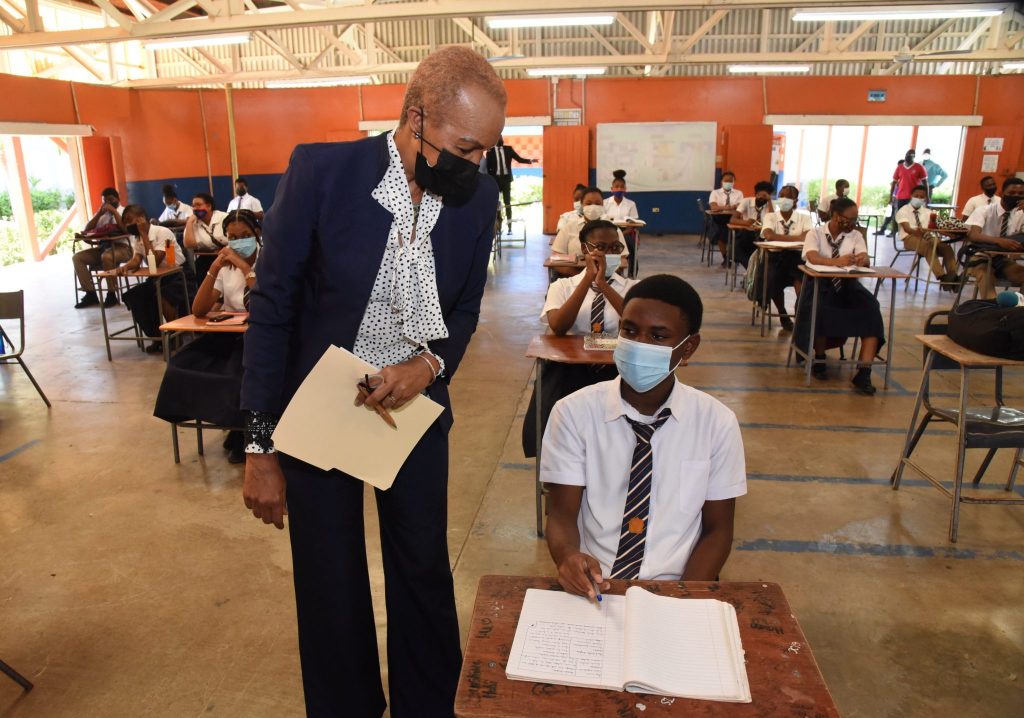 Minister of Education, Youth and Information, Hon. Fayval Williams, engages with a grade-11 student at the Dunoon Park Technical High School in Kingston, during a visit to the institution on Monday (May 10) to observe operations, as schools across the island resume face-to-face classes for students preparing for upcoming exams.

Chief Executive Officer of the Port Authority of Jamaica and Chairman of the National Task Force for the Logistics Hub Initiative, Professor Gordon Shirley, has outlined four imperatives for the maritime sector that must be in place by July 2014, if Jamaica is to remain on track in its development of the global logistics hub.

According to Professor Shirley, the country has to deepen the port and harbour to accommodate the larger ships that transit the Panama Canal; ensure that the port is being operated at the highest possible international standards; address the perception of an ineffective and bureaucratic business environment; and expand the port and attract new players to the sector.

He was addressing a breakfast forum hosted by the Jamaica Exporters’ Association (JEA) on November 19, at the association’s Kingston office under the theme: ‘Ensuring Infrastructural Development to Support Export Growth’.

In terms of the deepening of the harbour, Professor Shirley said that all the consultants are in place, the technical studies have been done, and the pre-tendering process is complete. All that is necessary now, he said, is to get the work done in time for the opening of the Panama Canal.

He emphasized that this is very important as the shipping lines need to know whether or not Jamaica can accommodate the Post Panamax ships.

Giving an update on the progress for the privatization of the Kingston Harbour, the Port Authority head said that the Government is pursuing a concession arrangement, which will see a concessionaire getting the right to operate the port for the next 30 years.

“The port of Kingston will still be owned by the Government. Fees will be paid to the Government for the right to operate the port but the operator will have the responsibility for all the activities that are above the water,” he explained.

He said that the Government will be responsible for activities below the water, including the dredging of the harbour.

Professor Shirley revealed that three “world class players” have been shortlisted for the project. These include a consortium, which involves CMACGM, a French company, in association with a Chinese company; Dubai Port World; and Singapore Port Authority.

He informed that the enterprise team established by the Government is to complete its work by June 2014 and make the necessary recommendations.

Turning to operations at the port, the PAJ head said that a port community system is being developed that will integrate the brokers, freight forwarders, shipping association, importers, among other stakeholders. This system will take all the information used in the transactions at the port and place it into a common information technology (IT) infrastructure.

He said that the system will operate as a public-private partnership, and its development is on track for the middle of next year.