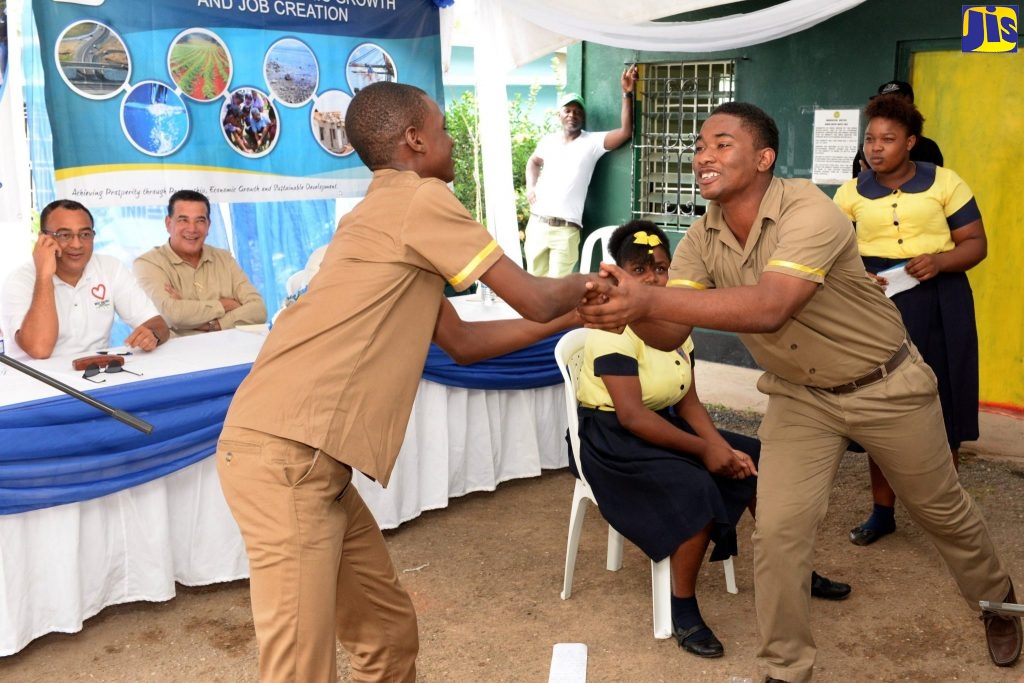 Member of Parliament for West Central St. Catherine, and Minister of Health and Wellness (left), Dr. the Hon. Christopher Tufton (left), enjoys the performance of students from the Tacius Golding High School in St. Catherine, at the ground-breaking ceremony for the $150-million Watermount Water Supply System, on February 19. Also enjoying the performance at second left is Chairman of the Rural Water Supply Limited (RWSL), Councillor Homer Davis.

Prime Minister, the Most Hon. Portia Simpson Miller, has praised the nation’s teachers for dedicating their lives to not only advancing education, but transforming the country’s populace through selfless acts of kindness.

“Many of you have for decades voluntarily given of your time and resources, beyond the call of duty as dictated by your job descriptions. In addition to providing lunch money and bus fares from your personal funds to students in difficult economic circumstances, many of you also provide extra lessons, lead a brownie pack, girl guides or scouting company, or cadet troupe…and provide other extracurricular activities free of cost,” she said.

She was addressing last evening’s (June 12) Prime Minister’s Medal of Appreciation ceremony at which 40 educators were awarded for service to education, on the lawns of Jamaica House.

The Prime Minister said the teachers’ courage and devotion to duty, burns bright despite the challenging times and difficult environment in which they often work.

She lauded them for not being deterred from voluntarily extending the reach of kindness, which is important in strengthening relationships within communities.

“Your contribution, through voluntarism, is matched by the Government’s commitment to ongoing education reform,” she said.

Describing teaching as a “labour of love”, the Prime Minister noted that the tireless efforts of teachers have helped to positively transform many lives, and credited the role of her teachers in gaining her the position as leader of the country.

“Students who have benefited from your tutelage, can stand before you as living proof of the transformation which education provides,” she said.

Minister of Education, the Hon. Rev. Ronald Thwaites, welcomed what he described as a “fitting gesture” by the Prime Minister to recognise persons “who have laboured faithfully in the field of education,” noting that the awardees in aggregate have exceeded more than 1,000 years of service to the upliftment of Jamaica’s people.

“I am always delighted to join in honouring educators who have dedicated their careers to molding the character and nurturing the intellect of generations of individuals, thereby enabling them to take their rightful place in society,” he said.

Rev. Thwaites noted that the value of the Jamaican teacher is inestimable, and should not be solely measured by the excellence of his or her students in the Grade Six Achievement Test (GSAT) or Caribbean Secondary Education Certificate (CSEC) results, but rather “that value which has been added to any and every student from the most challenged to the most brilliant, during the time when that student has been exposed to the inspiration of that teacher.”

Permanent Secretary in the Ministry of Education, Elaine Foster Allen, who was also awarded for her years of dedicated service to education, said many of the awardees have been instrumental in shaping education policy and have negotiated and implemented programmes that have benefited the nation’s children and the education system on a whole.

“Our awardees are people who epitomise virtues, principles, ethical standards that are worthy of emulation…These are men and women who have demonstrated wisdom, dealt sensitively with hard and challenging issues, disciplined, corrected, cajoled and saved many a child from him or herself,” she said.

Instituted in 2005, the award is given to an educator, who has served for a minimum of 15 years; displayed exceptional service in the teaching profession; and has shown evidence of community involvement, innovation and creativity in service.

Among the other dignitaries in attendance were: Governor-General, His Excellency the Most Hon. Sir Patrick Allen; Leader of the Opposition, Andrew Holness; Minister with responsibility for Information, Senator the Hon. Sandrea Falconer; and members of the Diplomatic Corps.