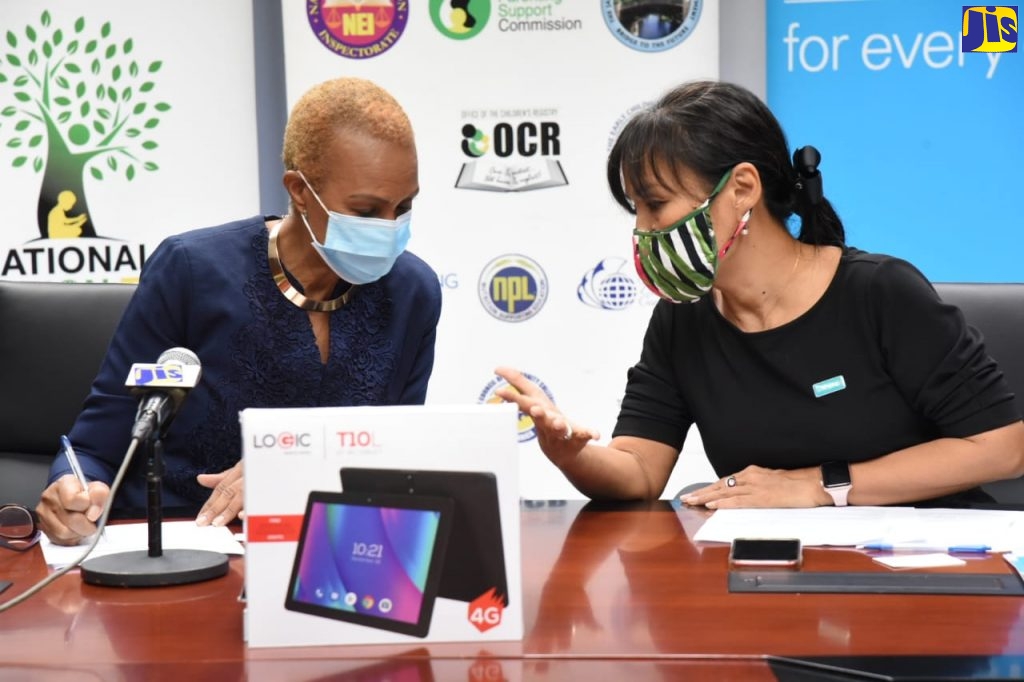 Minister of Education, Youth and Information, Hon. Fayval Williams (left), speaks with United Nations Children’s Fund (UNICEF) Jamaica Country Representative, Mariko Kagoshima, during a ceremony to officially hand over 534 tablets for students with special needs, at the Ministry’s Heroes Circle location in Kingston on Monday (November 30). The devices were provided under the ‘One Laptop or Tablet per Child’ initiative​.

Ministry to Look at Approach to Housing

Minister of Water and Housing, Dr. Horace Chang has said that the Ministry would be looking at its approach to housing, in a bid to improve the living conditions of persons in the informal sector. Dr. Chang, who was speaking at a recent JIS ‘Think Tank’, at the agency’s Half-Way Tree Road head office, noted that “nearly a third of our population live in substandard conditions, most of them in informal settlements, in either large semi suburban areas or in the downtown section of the Corporate Area.”
He said that these areas are usually comprised of several large tenement yards, where people are living informally with very poor infrastructure and in dilapidated conditions.
“The Ministry has to embark on a programme to improve the living conditions in these areas. As such, we will be looking at the Ministry’s approach to housing in three distinct areas,” he explained.
According to Dr. Chang, the Ministry is currently looking at the housing policy, which would guide all players in the housing sector.
“We have been operating without a policy since 1966. However, we are in the process of developing a comprehensive policy, which is a necessity in order to provide the guidance that is required as well as the cohesion, so that we don’t have everybody in the housing sector doing their own thing,” he told JIS News.
The policy, he noted, would examine the current situation, including the needs of the market and the kinds of solutions required to chart the way forward. Funding and the requisite human resource for this transformation, he informed, have already been identified.
“We have been approached by the World Bank and we are working with the Planning Institute of Jamaica. We have also approached the two major universities to put a team together, which will work on this policy,” he reported, adding that the first draft of the policy is expected to be completed within the next six months, with a final draft forthcoming within 12 to 18 months.In addition to the development of the housing policy, Dr. Chang said that more focus would have to be placed on the marketing agencies, such as the National Housing Trust (NHT).
“We have to guide the policy of the NHT and other agencies involved in providing new solutions and we have to work to identify affordable solutions, which means that the Ministry will take on the responsibility for both policy and research, and then provide the guidelines for the various agencies,” he explained.
Dr. Chang further explained that the Ministry would not only work with the NHT, but would also form major partnerships with the private sector.
“We want to expand and focus on joint ventures, where new solutions are concerned. In this way, we can utilize the private sector and their skills, while providing, primarily, project management service,” he said.
The Minister pointed out that in an effort to help solve the housing problem among low income earners, the National Housing Development Corporation (NHDC) has been restructured to focus on the low income level, in terms of management and implementation.