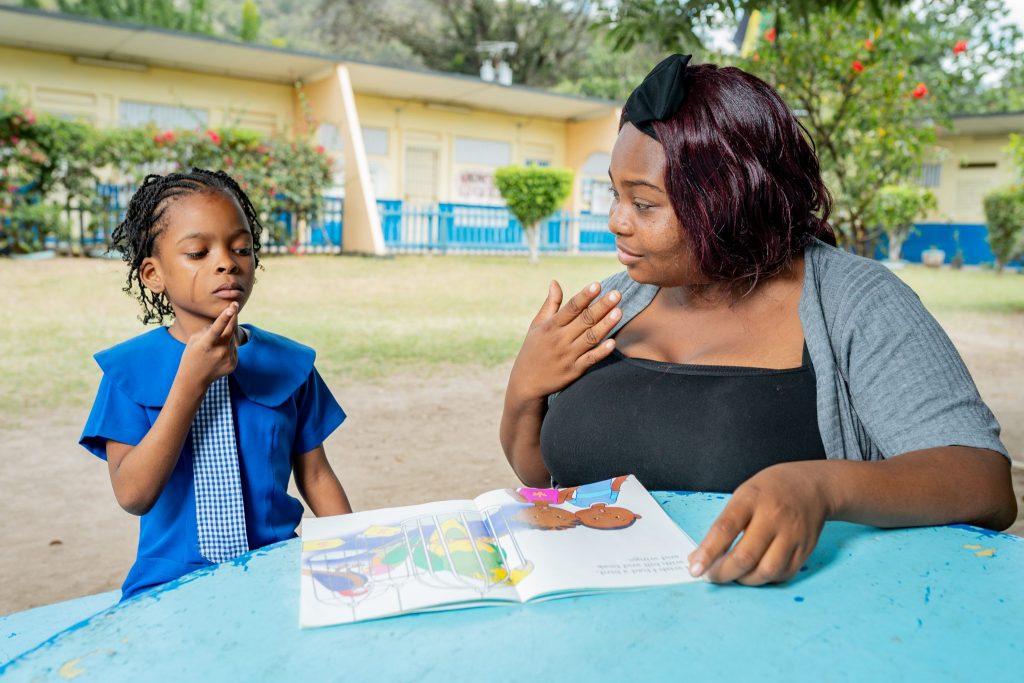 Diana Stewart (right), whose child attends Danny Williams School For The Deaf in St. Andrew, communicates through sign language ​with Cataleya Sawyers, who is a student at the school.

Legislation to Expand Free Movement Categories to be Tabled Soon

Amendments to the Caribbean Community (Free Movement of Skilled Persons) Act, which will broaden the categories of skilled Jamaicans able to access jobs in other regional states, are to be laid before Parliament soon.

Labour and Social Security Minister, Hon. Derrick Kellier, will table the amendments, development of which is far advanced. The legislation will increase the categories of workers who can apply for a CARICOM Skills Certificate.

According to the Ministry, the categories of skilled workers currently able to access employment in other Caribbean islands are: artistes; musicians; holders of degrees from recognised tertiary educational institutions; journalists/media workers; and sportsmen and women.

The proposed amendments will legally extend this facilitation to nurses; teachers; and workers holding specific categories of vocational qualifications, and are currently being addressed administratively.

These revisions will also empower the Minister, by virtue of a Ministerial order, to effect future amendments to the Act, implement an administrative system of processing applications, and set a schedule for payments.

The Caribbean Community (Free Movement of Skilled Persons) Act was promulgated by Parliament in July 1997, in furtherance of the provisions of 1989 Grand Anse Declaration. The declaration underpins the advancement of the Caribbean regional integration process through the creation of a Single Market and Economy.

The Act’s original concept has been modified over the years in efforts to facilitate full implementation of the free movement of skills mandate. This entails the right to seek employment in any CARICOM member state and elimination of the need for work permits and permits of stay (residence).

The revised Treaty of Chaguaramas, which was instituted in 2000, provides the formal legal provision of the CARICOM policy.

Statistics provided by the Ministry shows that Jamaica issued an overall 2,745 certificates to locals and nationals from several other territories, who submitted applications here, between 1997 and March 31 this year. The majority of these, 2,608, were awarded over the last six years, dating back to April 2007.

A breakdown of the figures for the six-year period shows that Jamaican applicants received the most certificates – 1,792, followed by Trinidad and Tobago – 295. Other countries whose nationals were issued with certificates in Jamaica include: Guyana – 195; Barbados – 128; St. Vincent and the Grenadines – 36; Antigua and Barbuda – 35;

The Caribbean Community (Free Movement of Skilled Persons) Act is one of five pieces of legislation, which the Minister is seeking to pilot through the House of Representatives during the 2013/14 legislative year.

The others are the Occupational Safety and Health Bill (OSH); National Assistance Bill; Disabilities Bill; and legislation related to flexi-work arrangements.

Regarding the OSH Bill, which is regarded as a priority on the Ministry’s agenda, Mr. Kellier informed that the document is currently being reviewed by the Chief Parliamentary Counsel (CPC), in order to effect revisions to the draft’s contents, based on recommendations from the Attorney General’s (AG) office.

He advised that when promulgated, the OSH Bill will enable the Ministry to effect measures aimed at improving working conditions, while safeguarding employees’ welfare.

With respect to the flexi-work week the Ministry informs that amendments are being proposed to existing legislation, which will facilitate wholesale implementation of this arrangement.

Flexi-work arrangements are characterised by a variation of the traditional 9:00 a.m. to 5:00 p.m. work schedule, to incorporate part-time work with benefits; telecommuting; and a compressed work week.

Noting that such arrangements already exist in several sectors, including health, transportation, manufacturing, tourism, and mining, the Ministry advises that there will be no specific flexible work arrangements law.

Instead, amendments will be made to the targeted legislation to remove the legal impediments to the implementation of the regime.

These include: the Holidays with Pay Act; Apprenticeship (Motor Mechanic Trade) Order; Minimum Wage Act and Orders; and Towns and Communities Act.

According to the Ministry, these statutes, in their current form, contain provisions deemed “contrary to the principle” of flexible work arrangements.

They restrict the opening and closing hours of establishments; limit the hours that can be worked and the days on which some persons can work; stipulate that the work day not exceed eight hours; restrict the operation of some business establishments on Sundays; and establish work weeks, which exceed the recommended 40 hours.

Cabinet has approved the tabling of a White Paper in Parliament, which sets out the approved policy with respect to flexi-work arrangements, and the issuing of drafting instructions to the CPC for amendments to be effected to the various pieces of legislation.

Meanwhile, work is advanced on the National Disability Act, to address and enforce provisions facilitating equalisation of opportunities for persons with disabilities.

The Bill, which is in its 12th draft, will seek to promote, protect and facilitate full and equal fundamental rights and freedoms for persons with disabilities, in all areas, including education and training, employment, political office and public life, health care, housing, and public transport.

The National Assistance Bill, which is also in its draft stages, is expected to repeal the Poor Relief Act. The Ministry is holding consultations on the Bill with several stakeholders, with a view of concluding these discussions as soon as possible.

The Poor Relief Act provides an allowance for persons of pensionable age, deemed poor, but who do not qualify for benefits under the National Insurance Scheme (NIS) or an occupational pension scheme, as well as persons below the retirement age, suffering from mental or physical disabilities that prevent them from providing for themselves and their families.