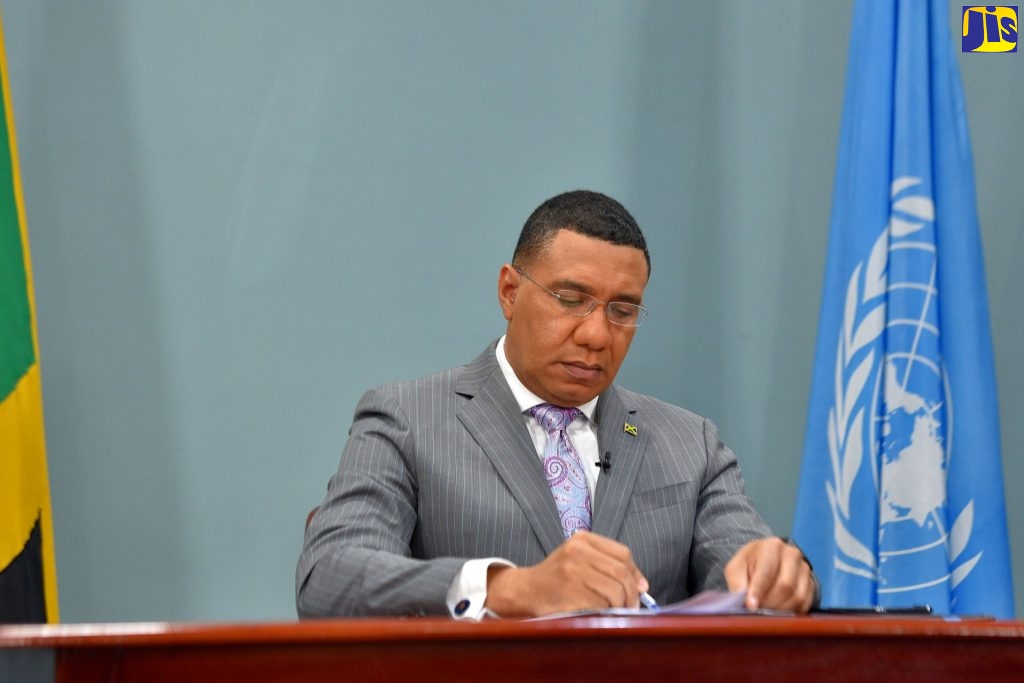 Prime Minister, the Most Hon. Andrew Holness, mskes notes to his speech before addressing the virtual High-Level Meeting of Heads of State and Government on ‘Financing for development in the era of coronavirus (COVID-19) and beyond’, held on Tuesday (September 29). The meeting was convened by United Nations (UN) Secretary-General António Guterres, along with Prime Minister Holness, and the Prime Minister of Canada, Justin Trudeau.

The Land Administration and Management Programme (LAMP) Unit in the Office of the Prime Minister (OPM), has commenced processing titles for persons occupying property at Narine Lands, Old Harbour Bay, in St. Catherine, to formalise their residence there.
Addressing a community meeting at the Old Harbour Bay Baptist Church on Thursday (January 28), LAMP’s Project Director, Ms. Gloria Brown told residents that the Unit has prepared files for 52 of the 251 landholders who sought assistance in regularising their occupation of the lands, by securing titles.
She assured them that “we will, very soon, be in a position, to give each of you a title for your properties”, adding that the Unit hoped to have all 251 titles ready for delivery by mid-year. An additional 31 individuals, occupying the property have already secured titles through the input of the Titles Office.
Outlining background details on the matter, Ms. Brown explained that the 251 parcels of land were among 282 subsumed into 366 acres of property, adjacent to Narine Lands that were acquired by a resident in the area in 1987, who secured a title for all of the lands. Narine Lands was reportedly sub-divided and sold in the 1940s by the owner after whom the property was named.
Ms. Brown informed that, consequent on the challenges arising for the landholders and their unsuccessful attempts at resolving the problem, the Ministry of Housing intervened “sometime after 1987” and successfully negotiated the transfer of 65 acres of the land from the person acquiring the property that year.
She said LAMP, cognizant of the challenges arising, subsequently negotiated the transfer of the 65 acres from the Ministry into their custody for which “we paid the duty on it of $45,000.”
Additionally, she said LAMP undertook surveys of the lands in 2002 and 2003, and commenced the necessary paperwork to formalise the residents’ holdings. The process included securing a waiver from the OPM, for subdivisions, for which she said a “problem’ was encountered.
Ms. Brown disclosed that of the 52 parties for whom files have been opened, “we have given 15 of you transfer documents, because we are ready to do your titles”. In this regard, she instructed them to provide LAMP with the requisite particulars, inclusive of a Taxpayer Registration Number (TRN), tax documents and receipts, among other things. She also gave LAMP’s undertaking to expedite processing of the remaining landholders over a three-week period, commencing next week.
“We are.coming back here next week.(and) we’re going to.open files for you,..bring back the documents for you to get them signed up, check on those who we have files for.so we can tell you what is happening and try to get some titles (prepared),” she assured.
Ms. Brown advised that a handing out ceremony would also be planned for Narine Lands and other communities in St. Catherine, adding that LAMP has already commenced the delivery of titles to landholders.
“Every month we are (going to be) handing out (titles). Last month we were in Linstead (St. Catherine) and we had about 300 odd titles to give out. We are going to Sligoville, we are going to Point Hill, and we want to have one here. So we are going to push you as fast as we can and try to have something here, maybe, about June or July. We want to give all the Narine Lands persons their titles by then, (all) 251, if we can. The Prime Minister (the Hon. Bruce Golding) has asked, specially, that he.take part in the .ceremony here. We are (also) going to St. Thomas in February,” Ms. Brown advised.
Member of Parliament for South West St. Catherine, and State Minister in the Ministry of Water and Housing, Hon. Everald Warmington, in his remarks at the meeting noted that land ownership could provide opportunities for the holders of same, stressing the importance of securing a property title.
“A title is an important investment in your future. It enables you to achieve. upward mobility.land is.wealth creating,” he pointed out.
Mr. Warmington also welcomed LAMP’s assistance to residents, asserting that “this spells good news for the parish and Narine lands.”
LAMP was established in 2000 by the government to address the high numbers of unregistered lots across Jamaica, by assisting individuals to acquiring titles for their land.
The project, which started as a pilot in St. Catherine, has been implemented throughout the parish, except in Portmore. Other parishes covered include: Clarendon, St. Thomas, St. Elizabeth, and parts of Manchester and St. James.