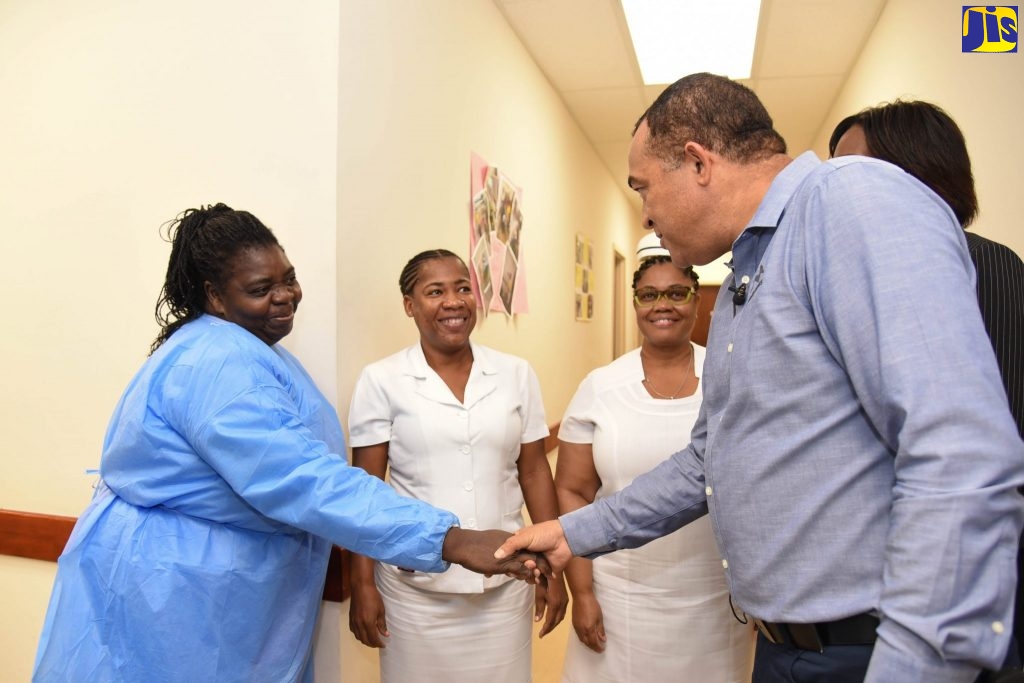 Minister of Health and Wellness, Dr. the Hon. Christopher Tufton (right), greets patient care assistant at the National Cancer Treatment Centre at St. Joseph’s Hospital, Nevido Jones, during a tour of the hospital on Tuesday (February 18). Sharing the moment (from left) are oncology nurses, Leona Dale and Cecile Francis-Patterson, while partially hidden is Director of Health Services, Planning and Integration, in the Ministry, Dr. Naydene Williams.

Major rehabilitative works have commenced on nearly 40 kilometers of roadway in the parish St. Catherine. The works which are valued at nearly one billion dollars are being undertaken along four main corridors. The roads are Tulloch to Zion Hill, Ewarton to Worthy Park, Natural Bridge to Pear Tree Grove and Featherbed Lane.

Manager of Communication and Customer Services at the National Works Agency Stephen Shaw says work on the 12 kilometer stretch from Tulloch to Zion Hill, the 10 kilometer road from Ewarton to Worthy Park and the 11 kilometer thoroughfare from Natural Bridge to Pear Tree Grove commenced last month. Featherbed Lane in Spanish Town is also being rehabilitated.

Mr. Shaw says that these projects are slated to be completed within nine months to a year. He says bushing of the road banks, trimming of overhanging trees and drain cleaning activities are all in progress.

The works also include the reshaping of the roadways, construction of retaining walls, drainage construction and paving of the thoroughfares with Double Surface Dressing and Asphaltic Concrete.

These roads form part of several that have been identified in St. Catherine, for rehabilitation under Phase one of the Jamaica Development Infrastructure Programme (JDIP).

Under the JDIP, the NWA has already completed work valued at nearly 100 million dollars in the parish. These include the completion of retaining walls along the Rennals to Point Hill and the Garden Hill to Kentish parochial roads. Similar work has also been completed in the community of Browns Town, which is located along the main road from Bamboo to Worthy Park.

Issued by: The National Works Agency