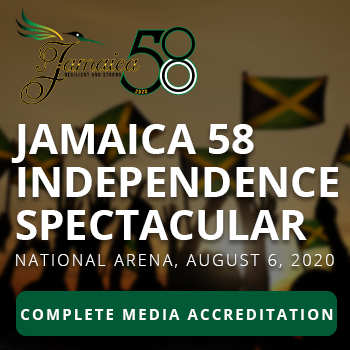 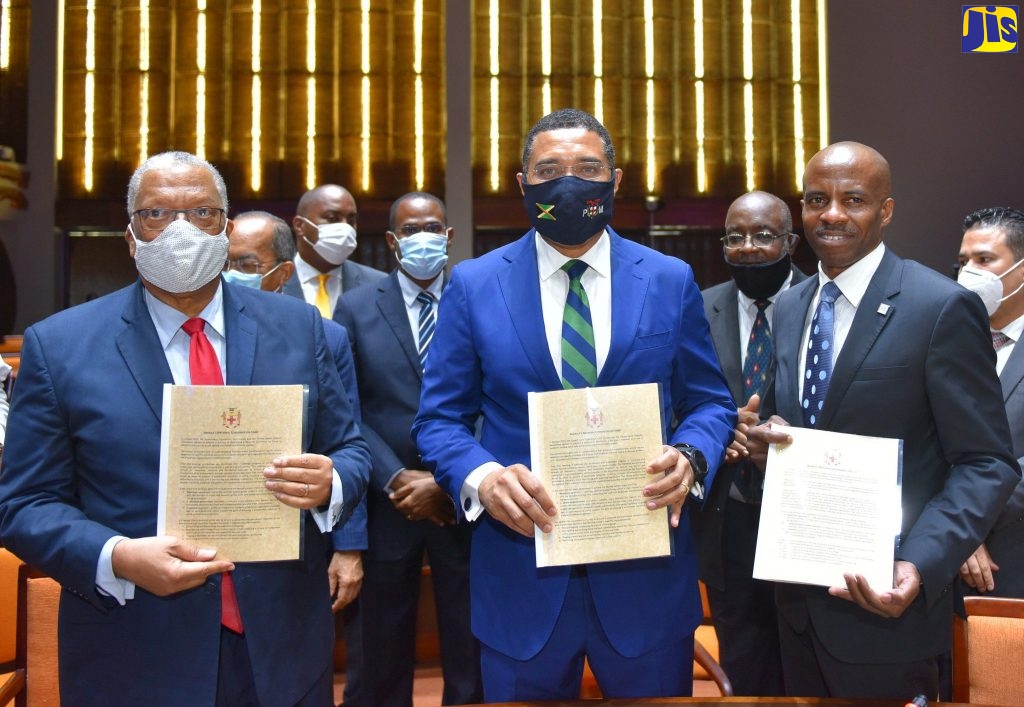 Prime Minister the Most Hon. Andrew Holness (centre) along with Leader of the Opposition, Dr. Peter Phillips (left) and Chair, Working Group, National Consensus of Crime, Lloyd Distant display copies of the signed Memorandum of Understanding (MOU) on the National Consensus on Crime at the crime consensus summit held at the Jamaica Conference Centre, downtown Kingston, on August 3. Others in the background (from left) are Minister of National Security, Hon. Dr. Horace Chang; Member of Parliament for South East St Andrew, Julian Robinson; Minister of Finance and the Public Service, Dr. the Hon. Nigel Clarke; Opposition Spokesperson on National Security, Fitz Jackson; and Minister without Portfolio in the Ministry of National Security, Hon. Matthew Samuda.

The Information and Communications Technologies (ICTs) 4D Jamaica, a non-profit industry advocacy lobby group, which is focused on fast tracking ICT in the country was officially launched on Thursday (March 25).
Speaking at the launch at the Four Seasons Hotel in Kingston, Elizabeth Terry, Facilitator /Administrator of the ICT4D Jamaica said that the programme was designed to bring knowledge to the workplace and facilitate development in the country.
She said that the programme would also facilitate new business models, e-commerce and bridging the digital divide. Additionally, she said that it would also partner with existing entities and projects that were ICT focused.
Other objectives of the programme are to promote, educate and lobby specific target audiences regarding the role of ICT4D Jamaica and to influence policies for its effective applications.
Mrs. Terry said that the programme would enable dialogue, networking and knowledge-sharing advocacy among stakeholders, partners and individuals from every sector.
The sectors that ICT4D Jamaica will target initially include tourism and hospitality, entertainment and music; agro processing and agriculture; education, training and community development and good governance.
The programme will also be spearheading a series of workshops this year with the first one starting in June for the tourism and hospitality sector in Montego Bay. Other workshops planned for the year include the agriculture and agro- processing sector scheduled for July/August and for the entertainment and music industry in November.
Minister of Commerce, Science and Technology, Phillip Paulwell who launched the programme, also endorsed the lobby group.
He said: “I wish to commend you on your vision that you have established for this group, the vision that Jamaica will be optimally integrated in the global economy and our businesses, our public institutions and consumers will all actively, confidently and securely participate in digital transactions that will facilitate economic growth, support social objectives and the creation of new businesses”. The International Institute for Communication and Development (IICD) based in Netherlands and Jamaica’s HEART Trust/NTA are jointly funding the programme.
Persons are invited to become members of the programme by going online to register at www.ict4djamaica.org.
Benefits of being a member include delivery of the programme’s newsletters, discounted workshop rates, networking opportunities, access to online services and more.