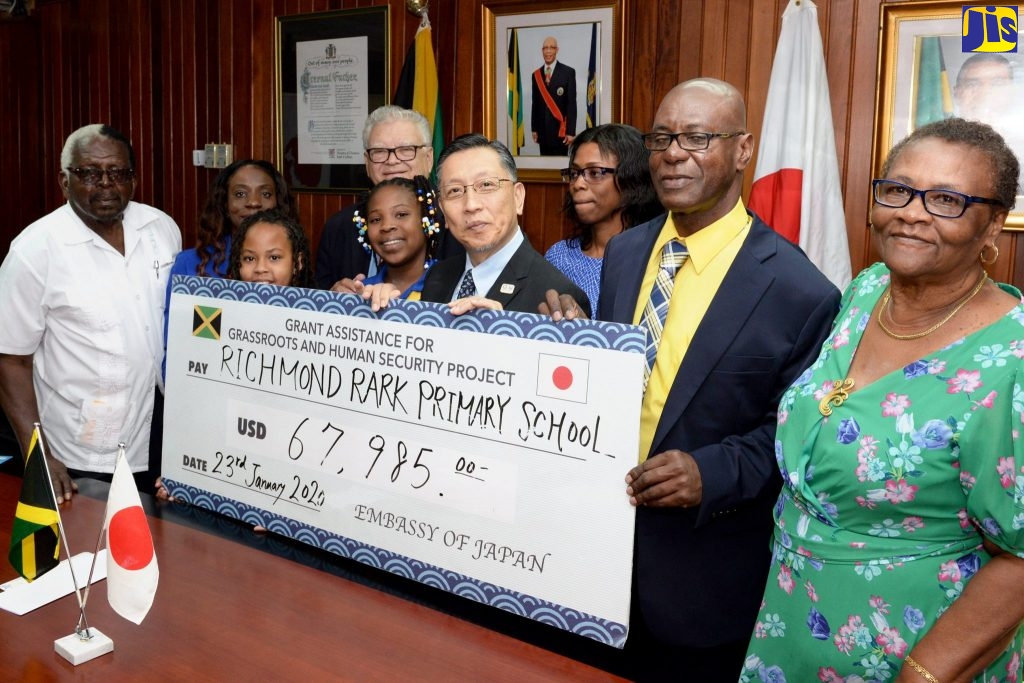 Minister with responsibility for Education, Youth and Information, Hon. Karl Samuda (second row, third left), and Member of Parliament for North Central Clarendon and Speaker of the House of Representatives, Pearnel Charles Srr. (second row, left), with a representational cheque valued at US$67,985 (J$8 million), which was handed over by the Ambassador of Japan to Jamaica, His Excellency Hiromasa Yamazaki (first row, third left), to Principal of the Richmond Park Primary School in North Central Clarendon, Delwyn Gordon (first row, second right), for the purchase of a school bus. The grant contract-signing ceremony took place at the National Heroes Circle offices of the Ministry of Education, Youth and Information in downtown Kingston on Thursday (January 23). Also sharing the moment (second row, from second left) are teachers at the Richmond Park Primary School, Sophia Lewis and Donnett Golding, while in the front row (from left) are students of the school, Mackebah Garrick and Akilah Elliston; and Chairman of the school, Merleta Copeland.

MONTEGO BAY — State Minister with responsibility for Local Government, Hon. Shahine Robinson, is urging Jamaicans to take advantage of facilities created by the Government to own land, so as to contribute to their personal advancement and the development of their community and parish.

She was addressing a civic ceremony to celebrate the 124th anniversary of the birth of National Hero, the Right Excellent Marcus Mosiah Garvey, held on August 17 at Lawrence Park in St. Ann's Bay, St. Ann.

Mrs. Robinson stated that Garvey believed in land ownership as a critical part of economic development. His idea was that land ownership would make citizens want to stay and contribute to the development of their communities and so prevent brain drain and urban drift.

“This was a dream of Garvey but remains an elusive one for many of us who are rich in terms of land assets but poor in terms of actual legitimate ownership,” she stated.

Mrs. Robinson noted that the Government, through the Land Administration and Management Programme (LAMP) and the Land Access for National Development (LAND) initiative to come on stream, is making this long sought after dream of Garvey a reality, by making access to land ownership easier for many Jamaicans.

Mrs. Robinson, who is also Member of Parliament for North East St. Ann, noted that the philosophy and teachings of the National Hero, who hails from the parish, have had a profound impact on national life.

This is evident, she said, in the goals of the local government reform process. She pointed out that the basic philosophy underlying the reforms is widening community involvement in governance as a means of deepening democracy and promoting equal rights and social justice for all, so as to create a framework in which the creativity, initiative and talents of the Jamaican people could be fully expressed.

She further noted Garvey’s influence in religion and culture, “as he has shown many black people that they have the strength to express their feelings and spread consciousness to a world-wide audience”.

“We must harness the potential through our creativity and talent in seeking to tap into maximizing these benefits,” she stated.

Mrs. Robinson commended the St. Ann Parish Council for keeping the memory and legacy of Garvey alive through ceremonies and other activities.

“We must continue to honour his legacy…by continuing to believe in ourselves as a people capable of great things, committed to contributing to the well-being of our brothers and sisters and celebrate his cultural legacy that has so fashioned Jamaica’s identity as a society with a rich cultural heritage for generations to come,” she stated.