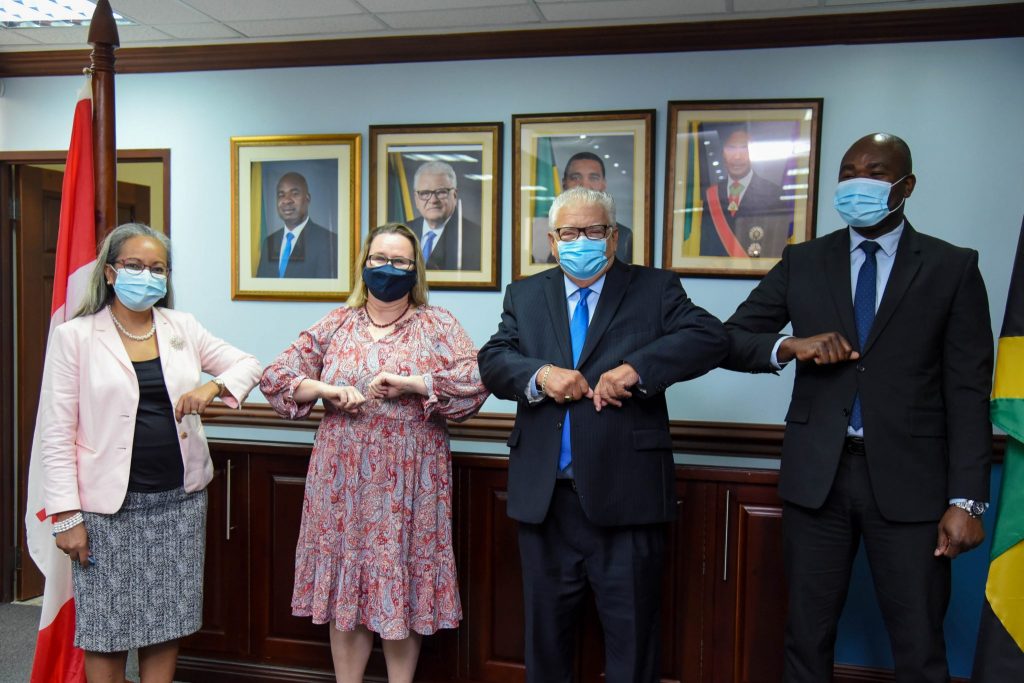 The staging of the rebranded trade show, Expo Jamaica 2010, scheduled for June 17-20 at the National Arena in Kingston, is a $20 million investment, which will have immediate medium and long-term positive impact on the profitability of participating local businesses.
The event, which has as its theme: ‘Brand Jamaica to the World!,’ is being jointly organised by the Jamaica Exporters’ Association (JEA) and the Jamaica Manufacturers’ Association (JMA) in collaboration with Jamaica Trade and Invest (JTI)/JAMPRO.
Speaking at a JIS Think Tank held this morning (June14) at the agency’s Half-Way-Tree Road headquarters in Kingston, JEA President, Vitus Evens, said that the upcoming trade show, which has attracted more than 200 buyers, both local and foreign, is expected to give a welcome fillip to efforts to grow exports.
He noted that although the economic climate has been challenging, with exports declining by some 49 per cent over the corresponding period last year, the performance of non-traditional exports is expected to remain buoyant going forward. “Brand Jamaica is a strong brand and we want the expo to further strengthen the brand,” he said.
‘Expo Jamaica 2010’ will feature a wide and spectacular array of Jamaican goods and services by some 250 local companies displaying in excess of 2,000 items in over 200 booths. Products will range from art and craft, to business solutions, chemicals, fashion, information and communication technology, minerals and metals, packaging and labelling, food and beverage, as well as textile and apparel.
The organisers have expressed delight with the upbeat response of both first-time and repeat exhibitors, about the prospect of showcasing their goods and services to the general public, as well as local and overseas buyers.
JTI/JAMPRO is a key player in recruiting and hosting buyers for the Expo and the agency’s Manager for Export Promotion, Berletta Henlon Forrester, observed that despite the negative impact of the civil unrest in sections of downtown Kingston, there has been no cancellation from repeat buyers. In fact, some buyers have already come in for the event.
“Already, some 65 business meetings have been requested so far and four or five organisations have come in ahead of the event. Repeat buyers are reporting positive feedback,” she said. The JAMPRO Executive explained that while repeat buyers are largely from Canada and the United States, this year, a dramatic increase from the Caribbean region has been recorded.
Meanwhile, the JMA is using the occasion to expose buyers to products offered by local manufacturers, build brand loyalty and enhance consumer awareness.
According to Executive Director, Imega Breese McNab, a high level of business activity and increased sales are expected from the Expo with food and agro-processing products the main items.
Going forward, Ms. Breese McNab is calling for greater attention to business facilitation and incentives for energy-saving equipment. “For our part, we will continue to explore opportunities to form strategic alliances and linkages with local and international entities such as tourism,” she added.
This year, while the event will be staged at its traditional venue, the National Arena, there has been a rebranding of the name and theme of the exposition, to boost marketing and promotion as well as increase support of the Expo as a landmark, national calendar event. Another new feature is that sales will be allowed during the event.
The official opening and buyers reception is scheduled for Thursday, June 17, at 5:00 p.m. and the event will be open to the public from June 18 through 20 from 10:00 a.m. to 8:00 p.m.