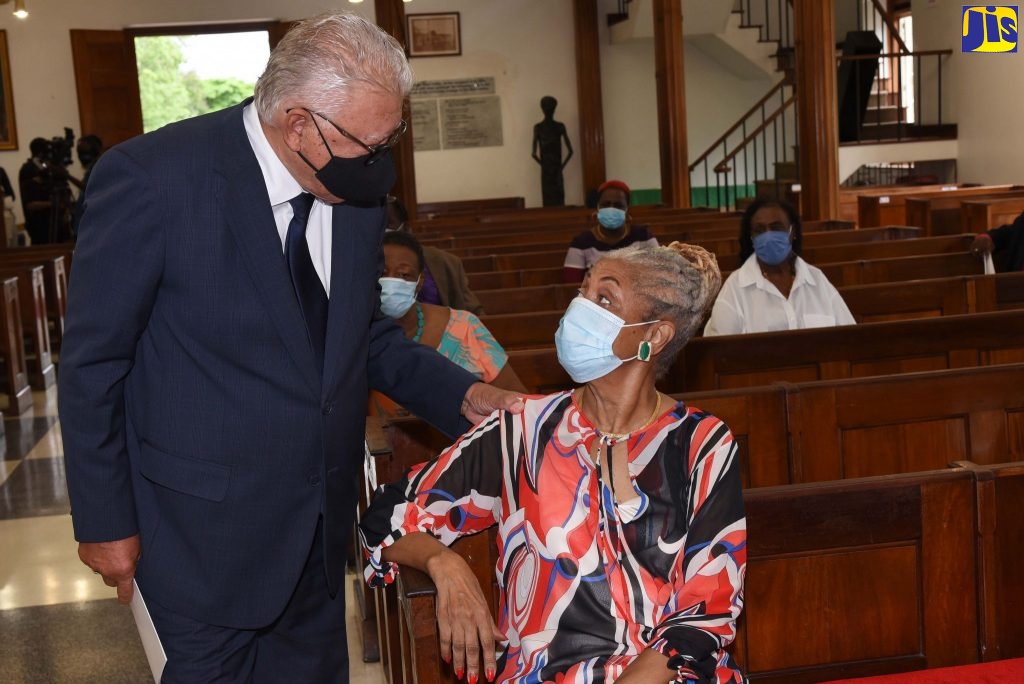 The Honourable Olivia “Babsy” Grange, Minister of Information, Culture, Youth and Sports has described as “positive” today’s confabulation between the Government and members of the music industry to consider steps to be taken to eliminate the practice of inclusion of unsavoury lyrics in Jamaican music.
Minister Grange who convened and chaired the meeting said that, “there was general agreement in the gathering that measures had to be taken to clean up our music.”
Leading the discussions on behalf of the Government, was the Prime Minister, the Honourable Bruce Golding who had with him Cabinet members, Miss Grange, the Honourable Andrew Holness, Minister of Education and the Honourable Ruddy Spencer, Minister of Health.
Other key Government representatives were Dr. Hopeton Dunn, Chairman of the Broadcasting Commission, Mr. Cordel Green, Executive Director of the Commission, Mrs. Faith Innerarity, Permanent Secretary in MICYS and Mrs. Mary Clarke, Children’s Advocate.
Mr. Golding told the gathering of musicians, artistes and producers that the Government did not want to be alone in the effort to “clean up” the music. “We need the support of the industry. I do not want Government to assume the right to determine what should be created,” the Prime Minister said.
But the Prime Minister warned that the Government is prepared to “come down hard on those who will not conform.”
Minister Holness said education should be used to improve culture “to make us a better people.” “Could there be an agreement between the agents of culture and those involved in education to see if we can improve who we are as a people?” the Education Minister enquired.
Minister Holness said there was also concern about what was happening in homes and he suggested the intervention of education and culture agents to influence parents who were not being discriminatory about what their children were being exposed to in the home.
Those who spoke from amongst the music and entertainment fraternity included poet and broadcaster, Mutabaruka, who had hit out against lewd lyrics when he attended a reception hosted by the Prime Minister on Sunday night.
Muta was again emphatic at today’s meeting, calling for those attending to “talk solutions.”
“I am proposing that we prosecute producers and distributors of inappropriate, obscene and violent music and let us also prosecute anyone who plays such music in public spaces,” he demanded to applause from the audience.
Producer Copeland Forbes called for the music industry “to operate as one to take the music to another level.” Fellow producer Don Corleone shared this view.
Another producer, Robert Livingstone called on corporate Jamaica to give more support to the development of the young people in the music industry. Mr. Livingstone was of the view that inappropriate music stemmed largely from the belief of some artistes that to earn “good money” from the business they had to resort to “dirty” lyrics.
Mr. Livingstone said that corporate Jamaica must be willing to help these artistes to re-position themselves for prosperity as “we move to clean up the music.”
The artiste Spice, whose music has been put into the category of being lewd, told the meeting that she was prepared to clean up her lyrics.
Spice said however that the society should give special space for “the younger generation” who wished to express themselves freely within the confines of decency.
Veteran DJ Tony Rebel, who commended Spice and told her that she had the ability and capacity to create wholesome music, said that, “we should never give up morals for money.”
The Children’s Advocate issued an impassioned appeal “on behalf of the children of Jamaica.” She called on broadcasters, entertainers and producers to “think of the children of this land and allow them their innocence as children.”
Mrs. Clarke said the artistes should remember that the children saw them as role models who they were inclined to imitate.
Ardenne High School Principal Esther Tyson said that while she appreciated the regulations that would apply to music over the airwaves; she was concerned about what was happening on the buses taken by school children. She said that for the most part the school children refused to take the JUTC buses, choosing instead to ride on those buses which catered to inappropriate music and behaviour.
At the close, Minister Grange said that, “the key is that today’s meeting demonstrated that we are talking with each other and there will be a follow-up.”