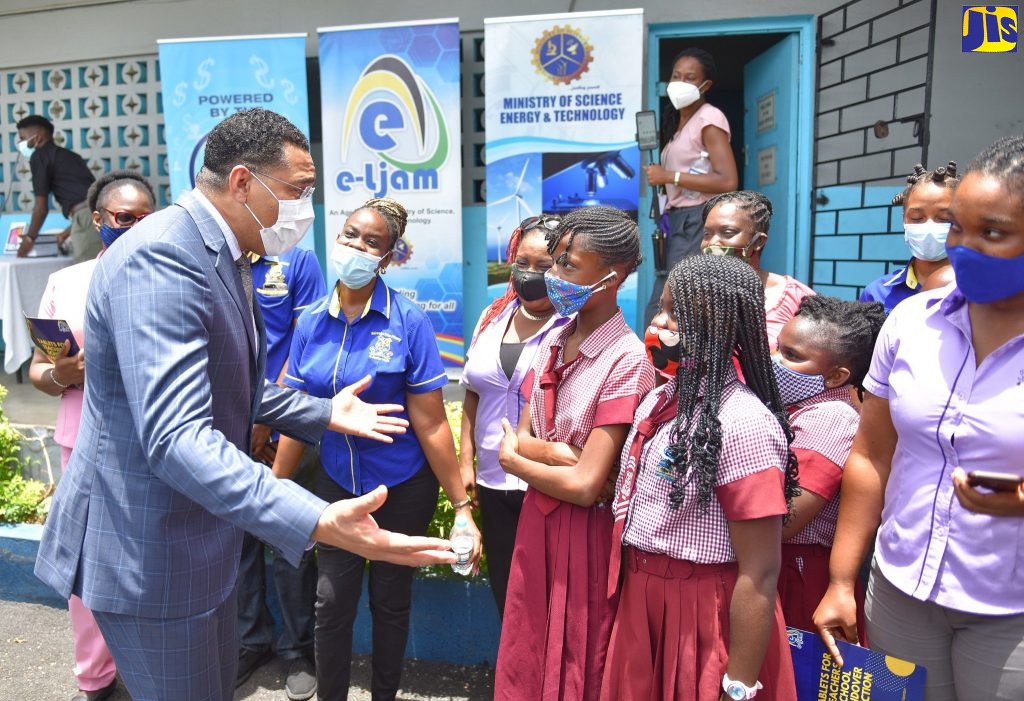 Prime Minister, the Most Hon. Andrew Holness (left), speaks with students and teachers at Balcombe Drive Primary School in Kingston, on Thursday (July 9), after handing over tablets to teachers at the institution.

The National Environment and Planning Agency (NEPA) is currently undertaking an islandwide survey to garner information on the population and distribution of the local crocodile, and to assess their habitats.
The first phase of the survey, which forms part of NEPA’s Crocodile Action Plan, began in January of this year and is expected to end by June 2005 at a cost of approximately $2 million.
In an interview with JIS News, Richard Nelson, Co-ordinator, NEPA biodiversity branch, explained that the survey was critical for improved management of the crocodile population by verifying if their population was increasing and the reasons for increased crocodile sightings, while exploring the need for establishing crocodile sanctuaries.
“This exercise will verify if what people are saying is true, that the crocodile population is multiplying and they believe this is a threat to humans. A survey will give an idea of where the animals are, their numbers and how they are distributed,” said Mr. Nelson.
The study will also examine the conditions of their habitats, which are usually wetlands, rivers and lakes, to see if they are being polluted and if there is enough food available in these habitats.
Increased pollution, habitat destruction and lack of food might force them to migrate to developed areas, causing fear among residents.
The findings will determine the need for the establishment of crocodile sanctuaries or specially designated areas in which crocodiles taken from developed areas can be placed.
There are population concentrations in eastern St. Thomas, St. Catherine, Clarendon and St. Elizabeth, with smaller populations in Hanover, St. James and Trelawny.
Mr. Nelson informed JIS News that the idea for a crocodile survey originated from the Crocodile Research Rescue Operation Committee (CRROC), which comprises NEPA and a number of non-governmental organizations (NGOs), including the St. Thomas Environmental Protection Agency (STEPA); the Caribbean Coastal Area Management Foundation (CCAM) and the Negril Environmental Protection Trust (NEPT).
This survey would be the first comprehensive study of the local crocodile population, noted Mr. Nelson, who pointed out that in previous years, scientists from various international institutions, such as the National Geographic Society and the University of Florida had conducted surveys along with NEPA, but only in specific areas across the island. CRROC is also involved in removing and relocating nuisance crocodiles.
Start up funding for the survey has been provided by NEPA with “in kind” assistance from NGOs.
To date, areas in St. Catherine, St. Thomas, Clarendon and parts of St. Elizabeth have already been surveyed.
A long term goal of the survey is the feasibility of establishing “crocodile farms”, where the reptiles are bred for their hide and meat, said Mr. Nelson, citing the experience of Cuba which has over 6,000 crocodiles on large crocodile farms.
The crocodylus actus or American crocodile is indigenous to Jamaica, but can also be found in other Caribbean territories, such as Costa Rica, Cuba, the Dominican Republic and Haiti. This species is also found in the Central American countries of Venezuela, Colombia, Panama and Ecuador and the Florida Everglades.
Crocodiles are similar in body to alligators. However, the major difference is the shape of their snout. The snout of the crocodile is long and slender, which contrasts with the broad, rounded snout of the alligator. There are no alligators in Jamaica.
Crocodiles are an endangered species worldwide. In Jamaica, the population is threatened by destruction of wetlands, hunting and killing. This led to the animals being placed under the Wildlife Protection Act of 1971, which prohibits the hunting, capturing or killing of the reptile. It is also illegal to have in your possession, the whole or any part of the crocodile without an exemption to the Wild Life Protection Act. The penalty for disobeying this law is $100,000 or 12 months imprisonment.