Minister of Agriculture and Fisheries, Hon. Floyd Green (right), looks at strawberries being cultivated by Cecil Robe (left) on his farm in Rock Spring, South Trelawny, during a tour of the area on Friday (January 22).

Power Of Attorney And The Accompanying Responsibility

With the many uncertainties of life, persons may not always have the time or the capacity to conduct their own business, hence the need for granting power of attorney privilege.

Power of attorney legally gives a person authority to conduct business on behalf of another, ensuring that affairs are handled appropriately and that peace of mind can be achieved.

For this reason, the Registrar General’s Department (RGD) wants Jamaicans to have a clear understanding of how the power of attorney works and why persons may need to seek legal advice before creating one.

Once you meet the criteria, what you are asking somebody to do is to act for you in your absence. Usually, powers of attorney are done when persons are overseas and have business to do locally and they need somebody to act in that matter while they are overseas,” says Ms. Williams.

Powers of Attorney are frequently used when dealing with land transactions where a registered proprietor resides overseas but is unable to travel due to ill-health or any other reason.

The Principal can execute a power of attorney granting another person the power to deal with his or her property locally.

With this much responsibility, it is recommended that principals consider selecting an appointee that is trustworthy and of good integrity who will act in their best interest.

Ms. Williams says powers of attorney are governed by the Records Office Act of 1879, where all deeds are required to be recorded at the RGD, and so before they can be transacted publicly they have to come to the RGD to be registered.

A power of attorney can be written by a legal representative or anyone with knowledge of the requirements of a power of attorney.
It can be a basic document or it can be quite in-depth as it relates to the functions that the principal wants the agent to carry out.

The document must be dated, have the name, address and occupation of the principal and appointee as well as the conditions and duration of the agreement.

It should also be signed by the principal and the appointee and verified by a Justice of the Peace (JP) or a Notary Public. The JP/Notary Public should also affix his or her seal to the document.

The document should be stamped by the Tax Office and the requisite stamp duty paid, after which it should be registered at the Island Records office at the RGD, where the document will be assessed for cost and the required fees paid.

“Registration involves us taking a copy of the document, applying reference numbers to the original, and putting the copy in our vault. So, once we have applied those registration numbers and the document has been properly examined by the examiner of the records and we put that on… the original document itself and give that back to the customer, then they can use the document to transact their business,” explains Ms. Williams.

Limited powers allow an agent to carry out a specific task within a specified time; and general powers allow agents to act on all matters for the principal as allowed by law. These may include handling bank accounts, signing cheques and selling property.

The third type is durable powers, which remain in effect even after the principal has become mentally incapacitated.

Ms. Williams says this is normally prepared while the principal is well. However, its durability allows that should the principal be unable to make decisions for themselves, that the agent continue to act in their best interest in accordance with the requirements of the power.

“A durable power can be done in a case where the principal may be leading up to a health condition that can be deteriorating, and so they are going to need somebody to act on their behalf should they become incapable of acting or doing things on their own. So, when this power is originated the person is in good health, but when the health begins deteriorating and they need somebody to make health or financial decisions for them, then this agent is authorised to do that. That can actually go on to the point where the person dies,” she notes.

Given the implications of each kind of power of attorney, Ms. Williams is advising persons to choose the power that best suits their needs.

Once persons are aware of the type of Power they wish to create, they can have a better idea of how to move forward.

The Power of Attorney is valid from registration until the stated end date, or until the task assigned to the appointee is completed, when the principal decides to terminate the agreement, or the donor dies.

“The principal in their capacity can determine that they no longer want this agent to act on their behalf, and so they can revoke this power.

So while it is active they can revoke it or at the end of the task to be done, the power can be revoked and then another document is done to indicate that this power that was granted on X date is hereby revoked and no longer in effect, and that document also has to be recorded with the RGD,” Ms. Williams explains.

Also, in any case, where the agent has abused the terms and conditions of the power of attorney, that person can be held liable and can be prosecuted.

“Should the agent supersede the extent of the power of attorney, a claim of personal suit can be taken against him by the principal. The terms of the contract are noted in the power of attorney, so if I have given you just a specific action to do and you have superseded that, then you can be liable for prosecution,” Ms. Williams tells JIS News. 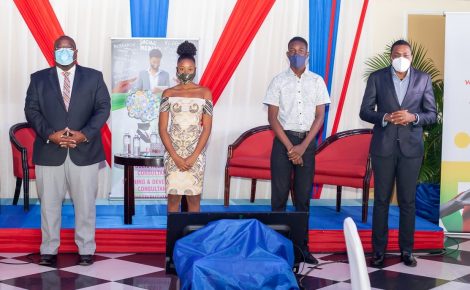 Two students of Pembroke Hall High School in St. Andrew have been selected as Jamaica’s inaugural recipients of the Creative Brands and Concepts-sponsored John Maxwell …

As the first ever Office of Disaster Preparedness and Emergency Management (ODPEM) Youth Ambassador, The Queen’s High School fifth-former, Kyla Gaynor, has grand ideas to …