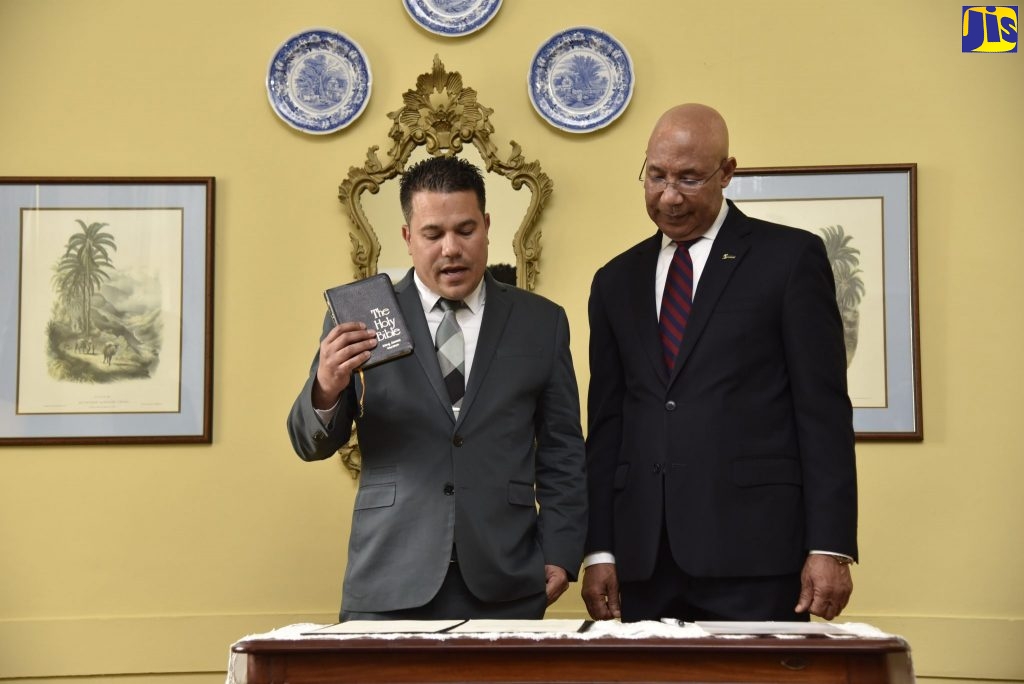 Governor-General, His Excellency the Most Hon. Sir Patrick Allen (right), listens as new Cabinet Minister, Senator Matthew Samuda, takes the oath of office, during the swearing-in ceremony on Monday (February 17) at King’s House.

The Government’s effort to create an enabling legislative and fiscal framework to attract investors has received strong support from one of the largest United States-based law firms, Baker and McKenzie.

Principal Partner of the firm with responsibility for global wealth management, Simon P. Beck, commended the Government for its bold moves to position Jamaica at the forefront of investment destinations.

Speaking at a reception hosted by the firm at its Washington, D.C. headquarters on Tuesday (March 1) to honour Jamaica’s Ambassador to the United States, Her Excellency Audrey P. Marks, Mr. Beck said Jamaica’s legislative and fiscal initiatives will make many of their clients say, “that’s the location, that’s where we should establish ourselves, because it’s absolutely perfect” for investment.

He touted Jamaica’s tax and investment treaties as “almost second to none in the Caribbean,” stressing that “most importantly, the Government is very much behind positioning Jamaica” as an investment centre.

He identified among Jamaica’s advantages its “wonderful location, the most wonderful geography, wonderful infrastructure, and one of the highest educated populations in all of the Caribbean.”

He noted, as well, the Government’s support and commitment to encouraging multinationals, executives, academics, and high net-worth families to establish a base in the country.

Tourism Minister, Hon. Edmund Bartlett, who was the keynote speaker, informed the more than 175 movers and shakers in Washington, who attended the reception, that legislation to reposition the financial service sector will be in place within the next 12 months.

“We are positioning ourselves in terms of redefining our own processes. We’re looking at how we can achieve growth, and how we can restructure ourselves,” said Minister Bartlett.

He said focus would be given to the services sector “as a critical platform for our own reconstruction efforts,” with tourism at the centre of that endeavour.

Stating that he was excited at the prospect of attracting more tourists from the Washington area, Mr. Bartlett further disclosed that Air Jamaica, which is now operated by Caribbean Airlines, would soon be resuming daily flights out of the Baltimore gateway.

He also paid tribute to Ambassador Marks for her tremendous effort in representing Jamaican interests in the United States. He described her as “a brilliant mind and a really outstanding entrepreneur from Jamaica, who understands business and diplomacy.”

In her response, Ambassador Marks said she was honoured and privileged to be representing her nation at this critical juncture in its development.

She underscored her main areas of focus as strengthening Jamaica-US relations; increasing trade and investment; and engaging the Diaspora to look at the investment opportunities available in their homeland.