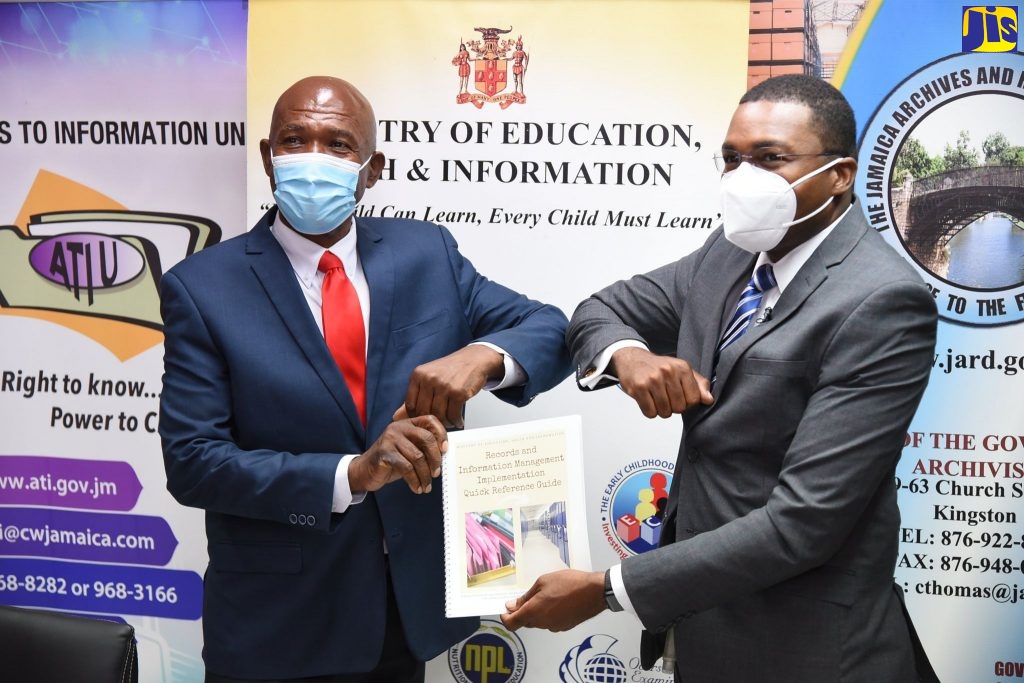 Minister of State in the Ministry of Education, Youth and Information, Hon. Robert Morgan (right), presents a copy of the Quick Reference Guide for the Government’s Records and Information Management (RIM) Programme implementation to Executive Director for the Overseas Examinations Commission (OEC), Hector Stephenson, during Monday’s (September 28) digital launch of the initiative targeting for the third cohort of ministries, departments and agencies (MDAs). The OEC is among the 25 target entities under this phase. The programme’s implementation is being led by the Jamaica Archives and Records Division (JARD), an agency of the Ministry of Education, Youth and Information, with support from the Cabinet Office.

Jamaican sprint queens Shelly-Ann Fraser and Kerron Stewart were special guests at today’s launch of the Jamaica Anti-Doping Commission’s public education campaign, at the high-profiled “Champions in Sport for Good” press celebration at the Hotel Ellington in Berlin, Germany.
Minister of Youth, Sports and Culture, Hon. Olivia Grange gave a premiere of the music video which spearheads the campaign, entitled ‘No to Dope’, in front of a large audience of sports journalists and sports stars from all over the world.
The event, hosted by the International Sports Press Association (AIPS) and the Laureus World Sports Academy, brought together some of the top names in the world of athletics, including former President of the International Olympic Committee, Juan Antonio Samaranch, Former 400 Metres Hurdles World and Olympic Champion Dr. Edwin Moses, Former Olympic 800 and 1500 Metres champion Lord Sebastian Coe and former 800 Metres World Champion Wilson Kipketer.
Jamaica’s reigning Olympic and World 100 Metres Champion Shelly-Ann Fraser endorsed the campaign, declaring that it would help to protect the integrity of Jamaican track and field. She said: “I think this campaign is really good and will definitely help our sport. Once people are aware of the consequences of drugs taking they will be deterred. Many people believe that because we are a small country we do not have the proper testing facilities but the authorities in Jamaica have been doing a good job testing us in and out of competition. I think all the athletes will welcome this campaign.”
World and Olympic Silver Medallist Kerron Stewart said: “As long as you are disciplined, you can achieve anything you want in life. We are taking athletics to another level and we are taking our time going about it. We are role models for the younger generation and it is very important for us to compete honestly and show what is possible if you have talent and determination. This campaign safeguards us and Jamaica’s athletics future.”
Minister Grange gave details of the campaign, explaining that the country’s top sports and music celebrities had recorded visual and audio endorsements which will be used to communicate the anti-doping message.
She said the campaign was being rolled out on television and radio in Jamaica, as well as on the Jamaica Information Service website at www.jis.gov.jm.
She told the audience: “We have an intense programme taking place in Jamaica at the moment. It not only appeals to sports stars but also fans. One of the areas we are targeting is the effect of second hand smoke on our athletes. We are ensuring that we put education at the centre of the campaign because an informed public will hold their sports stars to account and help to maintain integrity.”
The music video triggered some brave attempts at dancing among the audience and was well received in content and production.
Minister Grange said the intention of the project was to utilise Jamaica’s two most popular commodities; sports and music, in communicating the important message of drug-free competition in sports.
Dr. Edwin Moses, who was one of the pioneering advocates for out-of-competition drug testing, said Jamaica had made the right move and sent the right signal about its commitment to dope-free sports, especially at a time when the country’s athletes were dominating track and field.
The public education pack which contains information on Jamaica’s anti-doping programme and the one-year-old Jamaica Anti-Doping Commission (JADCO) as well as DVD copies of the music video and endorsements, was presented to those in attendance.
Minister of Tourism Hon. Edmund Bartlett who is in Germany meeting with tourism stakeholders and JADCO commissioner Dr. Herb Elliott joined Minister Grange in the presentation.