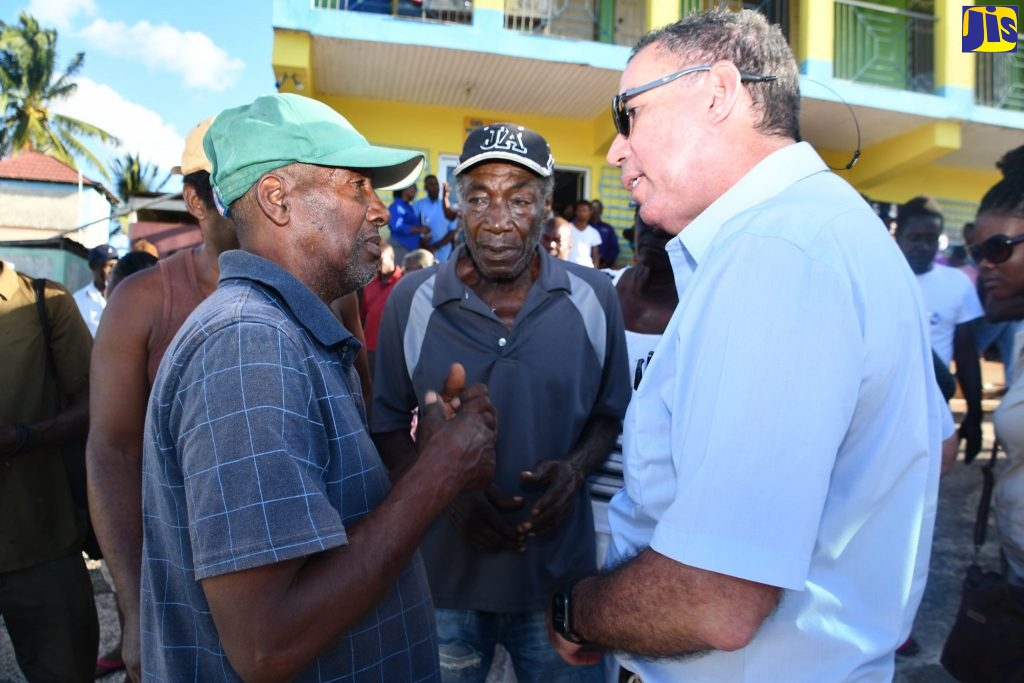 Minister without Portfolio in the Ministry of Economic Growth and Job Creation, Hon. Daryl Vaz (right), speaks with residents of the Myersville, St. Elizabeth during a tour of the community on Thursday ( February 13). Jiuquan Iron and Steel Company (JISCO)/Alpart’s $40 million compensation package, which will benefit 10 communities that surround the refinery’s plant, was discussed with residents during the tour.

The bicycle courier service, operated by the Westmoreland Police, has received a $100,000 boost from the Jamaica National Building Society Foundation.The cheque, which was handed over yesterday (Nov. 23), represents the final payment of a sum of $200,000 for project start-up and development.
Project Manager for the JNBS Foundation’s Rural Development Programme, Virginia Turner, who made the presentation, said that her organization was pleased to support the project, which was aimed at creating gainful employment for young people in Savanna-la-mar and surrounding communities.
“The Foundation is really pleased with the work that the police in Savanna-la-mar are doing with the youth and that is why we are behind it 100 per cent”, she stated.
Corporal Balfour Gore, Assistant Co-ordinator of programmes in the community relations department, explained that the service was established approximately one year ago to address the high level of youth unemployment in the inner city areas of Savanna-la-mar.
“We figured that it (unemployment) impacted negatively on the crime situation. These youngsters were dropouts and they were at a crossroad, and they needed some amount of direction so we said to ourselves, in addition to the programmes that we already have, we need to provide job opportunities for these youngsters”, he said.
Three police youth club members are presently employed to the courier service, which operates in Savanna-la-mar and surrounding areas, and their jobs involve the picking up, sorting and delivery of mail and other packages, for a small fee. A steering committee spearheaded by the police and the Rotary Club of Savanna-la-mar is overseeing the project.
Corporal Gore pointed out that with the consent of the commanding police officer for the parish, the initiative was operating from the grounds of the Savanna-la-mar police station and residents could access the service by calling 320-4084. He noted that the project had become self-sustaining, but wants more businesses to utilize the service.
Corporal Gore expressed the hope, that through the project and other social initiatives, the community would begin to see the police as more than just law enforcers. “We want people to see the police as also a group that care about other people and care about other areas and aspects of their lives”, he stated.
Chairman of the project steering committee, Eric Clarke told JIS News that eventually, the hope was to help young men find jobs within the business sector. It is projected that up to 20 young people would eventually be employed to the courier service.