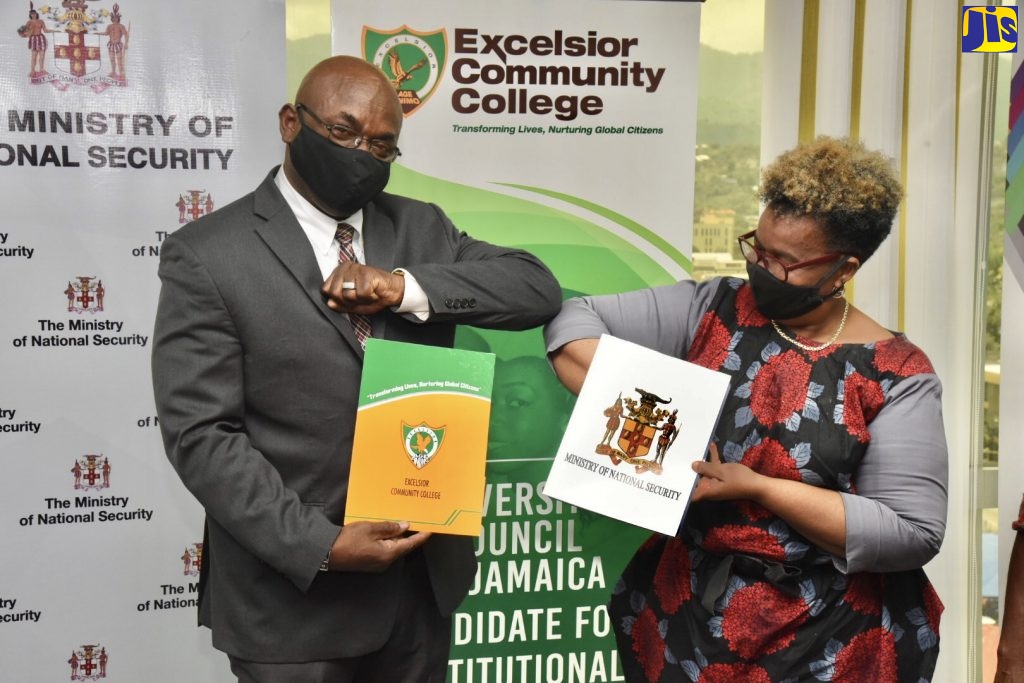 Permanent Secretary in the Ministry of National Security, Dianne McIntosh (right); and Principal, Excelsior Community College (ECC), Philmore McCarthy (left), celebrate the official signing of a Memorandum of Understanding (MOU) for the Bachelor of Science Programme in Business Administration, at the Ministry’s Oxford Road offices in St. Andrew on August 13.

Consul General to New York, Dr. Basil K. Bryan, has paid tribute to Jamaicans in the United States, who continue to strive for success despite the various challenges.
“Like any other immigrant group, my people come here in search of opportunities. They bring a high level of commitment to this their new home. They strive, they succeed and they contribute,” Dr. Bryan noted.
He was speaking at the 2005 New York Congregational Community Services’ awards ceremony held on October 27 in Brooklyn, where he was presented with the Spirit of Life Award for outstanding public service to the Brooklyn community as well as advancing the mission of the New York Congregational Group. Yvette D. Clarke, member of the New York City Council, also presented Dr. Bryan with a citation for his work with the Jamaican community in his jurisdiction.
According to Dr. Bryan, the United States was like a fabric made up of various groups of people from diverse backgrounds and cultures, all coalescing in unity. He pointed out that immigrants from Jamaica and the wider Caribbean were doing similar or better than other groups in search of opportunities and progress.
The Consul General praised the work of the New York Congregational Community for its advocacy and outreach programmes in the areas of health and wellness. “We are nothing unless we can reach out and provide a helping hand to someone who is in need. We must provide a shoulder that others can stand upon to see further than we can,” Dr. Bryan stated.
Marty Markowitz, President of the Borough of Brooklyn, Yvonne Graham, Vice President and two Brooklyn-based non-profit organizations, were also honoured with the Spirit of Life Award.
The Low Income Investment Fund and the Non-profit Finance Fund, which provides the Congregational Services with technical support, were presented with the Harriet Righter award.
In congratulating the 2005 awardees, Celia C. Zukerman, President and Chief Executive Officer of New York Congregational Services, said that as elected officials, they continue to respond admirably to an identified need and that they have earned the respect of the community through the services they provided and the partnerships they have formed.
Meanwhile, Dr. Bryan was presented with the Public Service Award by the Caribbean American Family Services (CAFS), Inc. for “dedication, foresight and unwavering commitment”, to the Jamaican community in New York. The award was presented by Bronx Borough President Adolfo Carrion at a dinner held on October 28.
CAFS, a non profit, immigration advocacy group has assisted over 21,000 families and individuals including a large number of Jamaicans to upgrade and improve their immigration status.
On Saturday, October 29, Dr. Bryan received the Oneness Rehoboth Community Service Award for outstanding public service from the Oneness Rehoboth Apostolic Church of Mount Vernon. Bishop Arthur Thomas, who made the presentation noted that, “the Consul General has been consistent in his support of the Jamaican constituency throughout the Tri-State area and has made a tremendous impact through your designated area of service.”